An antibody is a large Y-shaped protein made of four polypeptides produced by the plasma cells in response to an antigen to identify and neutralize viruses and bacteria. Monoclonal antibodies (mAbs) are man-made proteins with promising applications in the treatment of different diseases, such as cancer and asthma. Some challenges associated with the production of mAbs include high cost and low stability. In addition, quantities can be extremely limited in the early phases of research and development. 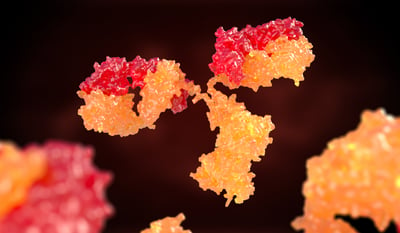 The desirable properties for the target mAb products include stability, compatibility, syringeability, and injectability. Among these, syringeability and injectability as well as the overall quality of the mAb can be quantified by measuring the viscosity of the product. However, for direct injectability characterization (i.e. injection force measurement) of mAbs, a relatively high volume of antibody sample is required which is neither ideal nor cost-effective.

To address these limitations, antibody mimics are designed and developed as an effective tool to replace mAbs for characterization purposes in biomedical and pharmaceutical applications. Polymers such as Polyethylene Oxide (PEO) and Hydroxypropyl Methylcellulose (HPMC) are among the materials that have been broadly investigated for use as antibody mimics due to their specific rheological properties relevant to mAbs and their low production cost. It should be noted that the structure of polymers and antibodies are significantly different. Polymers are macromolecules composed of long chains of monomers with the tendency to transition from a random coil structure to an entangled network with increasing concentration. With their Y-shaped structure, antibodies are more like colloids such that with increasing concentration they tend to occupy a consistent spherical volume without entanglement.

In our application note, "Evaluation of Polymers as Monoclonal Antibody Mimics", we show how we use VROC® initium one plus to probe the shear rate dependent viscosity of polymers at different concentrations and evaluate their capability for use as antibody mimics by comparing their viscosity and shear thinning behavior with different mAb formulations provided by Comera Life Sciences. 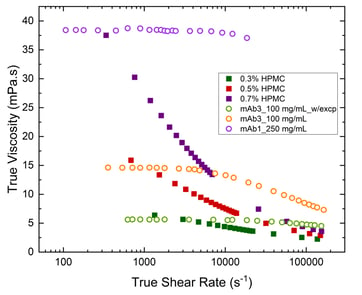