Ok, here’s the scene...An explorer is traipsing through the jungle, visibility is low due to the dense vegetation, he’s chopping away at the vines and plants when suddenly he enters to clearing.

He steps forward, thinking he’s made it out of the dense jungle, when suddenly he begins to sink into the soft ground. Try as he might he can’t escape; the more he tries, the faster he begins to sink. He has a look of sheer terror on his face, it is then he realizes he has stepped into quicksand! The explorer is in a panic, he flails his arms and body as he tries in vain to free himself, but it is of no use he sinks faster and faster. The explorer continues to until he disappears into the muck and mire leaving only a safari hat behind.

Oh, If only he had paid a little more attention in his fluid dynamics classes, he would then had realized the quicksand was non-Newtonian, shear thinning! This of course would have given him vital information on how to survive this gruesome fate.

Do you know if your sample is non-Newtonian? Does your current viscometer have high shear rate capabilities to reveal shear thinning or shear thickening properties? Don’t leave it to chance or suffer a fate worse than death – bad data from not fully characterizing your sample! 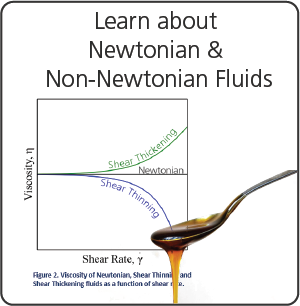