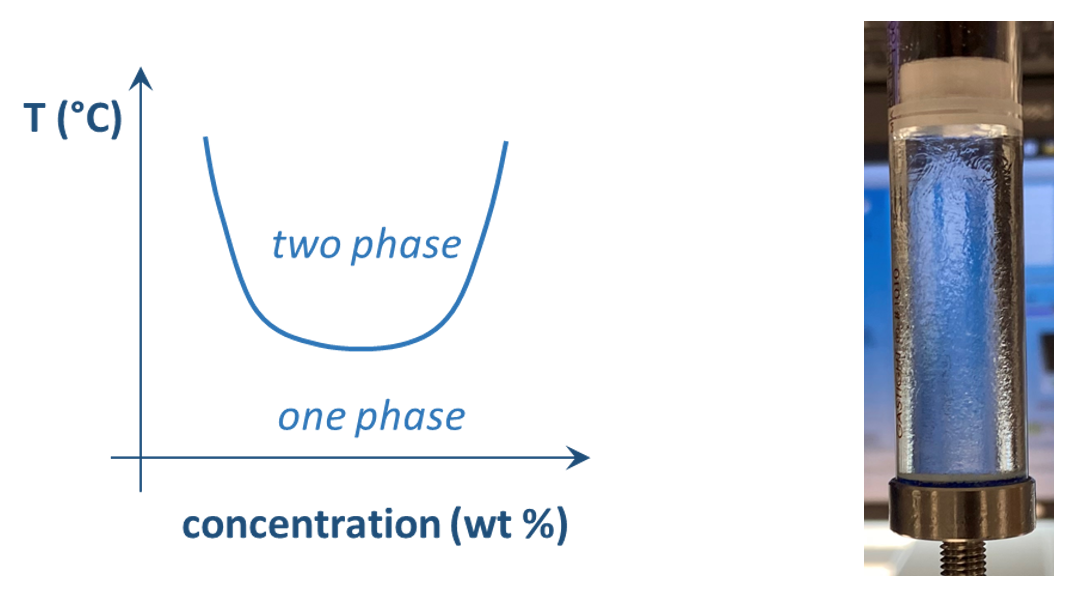 Unlike inorganic salts such as KCl and NaCl that melt in the vicinity of 800°C, organic salts referred to as ionic liquids (ILs) have a melting point below 100°C. Some ILs will even be fluid at or below room temperature. ILs have a number of desirable properties such as low vapor pressure, thermal stability, high ion density, and high ionic conductivity. As a result, researchers in a variety of fields have taken interest in both pure ILs and those in mixtures. Some general areas of application include using ILs as solvents, electrolytes, and a basis for creating functional materials.

Multiple extraction and separation processes employ IL/water mixtures as a solvent. Examples include the separation of water-soluble proteins and solar desalination. Mixtures used for this purpose have the unique feature of being thermally responsive.  In these materials, temperature variations induce structural changes such as a liquid-liquid phase separation. Although it is more common for ILs to become increasingly soluble with heating, certain anion-cation pairs with an intermediate hydrophobicity will display the opposite response to temperature. They will transition from a homogeneous single phase to a two-phase fluid above a lower critical solution temperature (LCST). Although the LCST will depend on the exact level of the ionic liquid in the mixture, a concentration ranges exists for some ILs where the transition occurs somewhere between approximately 30 to 40°C. This relatively low LCST is appealing for an application such as the solar desalination process.

We have previously demonstrated the use of viscosity to monitor microstructural changes in other types of thermoresponsive fluids such as poloxamers and various bio-ink materials. Phase transitions for these fluids typically resulted in a departure from Arrhenius or exponential behavior.

Our application note, Thermoresponsive Ionic Liquid Mixtures: Identifying the Lower Critical Solution Temperature with Viscosity, explores the temperature dependent viscosity of a P4444TFA/water mixture expected to exhibit a LCST. Here we identify the transition temperature which compares favorably to values in the literature obtained from rotational rheometry as well as UV-vis and differential scanning calorimetry (DSC). We also discuss how our multiple instrument options can help overcome the challenges of handling a two-phase fluid with density gradients.