What are the Differences between Dynamic and Kinematic Viscosities?

Viscosity is a fundamental material property when studying fluid flow for any application. The two most common types of viscosity are dynamic and kinematic. The relationship between these two properties is quite straightforward.

Simply put, dynamic viscosity gives you information on the force needed to make the fluid flow at a certain rate, while kinematic viscosity tells how fast the fluid is moving when a  certain force is applied.

The internal resistance of a fluid to flow (dynamic viscosity) implies that there is a force involved in displacing a fluid. That force (F) is proportional to:

Historically, viscosity measurements methods opted for kinematic viscosity since it does not involve measuring a force. In most “kinematic” viscometers, the fluid flow is driven by gravity (g). These methods (capillary tubes, funnels…) just measure the time that the fluid takes to flow through a given geometry. More advanced viscometers rely on measuring shear stress at a given rate of shear. This enables a much more complete characterization of the viscosity fingerprint (i.e. Viscosity vs shear rate) of complex non-Newtonian fluids.

Another difference between these two properties is the uniqueness of their units. Dynamic viscosity units are well established mPa-s in SI units or the equivalent cP (centipoises) in CGS. On the other hand, most common kinematic viscosity units are cm2/s in SI units and cSt (centistokes) in CGS, but it is also measured in a number of arbitrary units depending on the industry or application. Such is the case of Saybolt Universal Seconds (SUS) in the petroleum industry where the time required for 60 cm3 of fluid take to flow through a calibrated tube at 38°C is used as a measurement of viscosity. Another example is the use of “cups” to measure the time that a given sample take to flow through a funnel of a given geometry. These methods are often used as viscosity indexers since they are not ideal to obtain consistent results that can be shared between different laboratories.

So which one should you use? If you are interested in the interaction between molecules that can be interpreted in terms of mechanical stress, then dynamic viscosity is more appropriate. Dynamic viscosity will allow you to establish, for example, the effect that formulation changes have in regards of molecular interaction and viscosity. In contrast, kinematic viscosity has been the standard in oil industries because of the simplicity of the kinematic viscometers. For this reason, kinematic viscosity has been more convenient when the interest is the fluid motion and velocity field since it carries the information about the propagation of movement by friction. RheoSense’s VROC® technology represents a new paradigm in viscometry, allowing fast and easy measurements of dynamic viscosity that are just Simply Precise™. 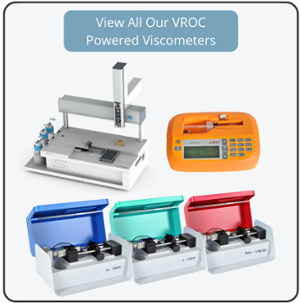 Contact us to speak with one of our rheology experts today!