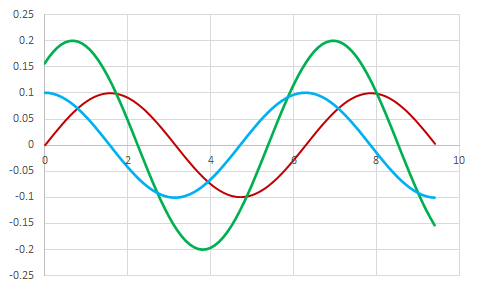 As was noted in our previous blog, rheology measurements are focused on the rheological properties of materials, including:

When it comes to rheology measurements there are hundreds of different equations and measurement variations you can take. In this blog, we will be highlighting only the most commonly applied equations.

When measuring deformation of solids, Hooke’s Law of Elasticity is most often applied, relating stress and strain, or more specifically the force (F) needed to extend or compress a spring by some distance (x).

A fluids resistance to flow is typically measured as viscosity. Newton’s Law of Viscosity describes the flow behavior of fluids using a simple linear relation between shear stress [mPa] and shear rate [1/s]. 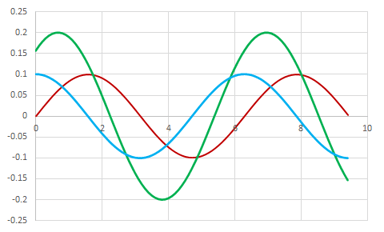 In general, stress will be offset by phase angle :

One important thing to note about viscosity (along with other rheological measurements) is that while it is called a measurements, it is not measured, but calculated. Scientists have been studying non-Newtonian fluid behavior for decades and have developed models to facilitate characterization. The outputs of these models can be used to interpolate and extrapolate data, categorize materials based on model parameters, and help with computational fluid dynamics simulations. (Dr. Zachary Imam) Viscosity is dependent on concentration/ volume fraction, temperature, and shear rate. There are models to help model fit all of these different behaviors. Model fitting can support both practical applications (performance predictions and processability) of your measurements and as an investigative tool (complex structure formation, formulation, etc.). A few common model fittings/ corrections used for viscosity measurements are:

The Cross Model is an empirical equation that is used to fit non-Newtonian data (Cross, 1979). this model “describes pseudoplastic flow with asymptotic viscosities at zero (n0) and infinite (*infinity*) shear rates, and no yield stress” (Hackley and Ferraris, 2001). This model is used to fit many types of fluids including dispersions, polymer melts, and polymeric solutions.

The Carreau-Yasuda Model is another empirical equation used to fit non-Newtonian data (Bird et al., 1987), also “describing pseudoplastic flow with asymptotic viscosities at zero (0) and infinite () shear rates, and with no yield stress” (Hackley and Ferraris, 2001). This model is well suited for fluids that are beginning to shear thin, and can be used to describe emulsions, biopolymer solutions, protein solutions, polymer melts, and polymeric solutions.

The Carreau-Yasuada model is generalized form of the Power Law Fluid Model, which describes the behavior of a non-Newtonian fluid over the range of shear rates where the fit is performed. The power law model only has two fitting constants which is much simpler than other models that fit non-Newtonian fluids

The vast majority of fluids in the world exhibit non-Newtonian behavior. So, knowing how to measure, correct, and handle non-Newtonian rheological data is vital for performing accurate and repeatable experiments and data analysis. One final common correction to note is the Weissenberg-Rabinowitsch-Mooney (WRM) analysis. Some viscometers, including rectangular slit viscometers, apply multiple shear rates across a flow field because of their geometry. Because the shear rate changes within the flow field, both the shear rate and the viscosity must be corrected once data is collected. The WRM correction is an analysis method that can determine the “true shear rate,” using the “apparent shear rate” measured by the viscometer (Macosko, 1994). 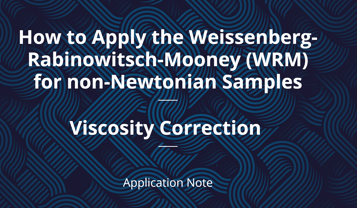 Analyzing accurate data is vital for decision making throughout the research and development process. Mathematically modeling your data improves your data analysis and fluid characterization. The constants generated by various model fits have multiple uses from ranking fluid performance to performing calculations that are relevant for your samples. If you want to learn more about model fitting and viscosity measurement corrections, contact us to speak with one of our rheology experts! Or visit our applications note library to read more about the model fittings and how to perform them.

Previous Story
← VROC initium Software Update - June 2021
Next Story
Rheology Modifiers: What They Are & How They Work →