Viscosity and surface tension are both important fluid properties. Both play a key role in product development (ex: detergents, inks, biopharmaceuticals, injectables, food and beverages), however both affect fluids and development differently. 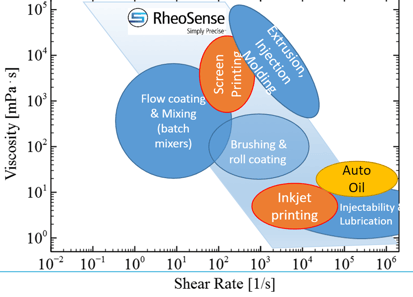 Viscosity is a fluids resistance to flow, often referred to as the "thickness" of a fluid. At a molecular level, viscosity is a result the interaction, or friction, between the different molecules in a fluid. While that seems straight forward, viscosity is complex and often confusing concept. First, there are many types of viscosity - dynamic, kinematic, steady sheer, relative, extensional - and understanding what they are is only the first piece of the puzzle. Type of fluid, temperature, flow conditions, and pressure are all factors affecting viscosity. When considering all the complex factors that influence viscosity, this seemingly simple concept becomes complex quickly.